So sometime last year I started to have this intermittent problem - from time-to-time when I'd start the VX and the blower fan for the AC wouldn't cut on. I could feel cold air coming from the ducts when venting to the outside, but when on recirculating I couldn't feel anything at all. I did some checking around and found that the most likely culprit was the blower fan itself. The two other possibilities were the Resistor for the system (when this is bad the air comes out full-force and you can't dial it back) and the Climate Control panel itself. I started calling around for parts figuring I could pick up the blower motor and resistor and work backwards. Unbelievable how much they are from Isuzu. I managed to find an aftermarket blower motor on Amazon for $47 shipped and started with that. It came in the mail last week and I went about on Saturday replacing the motor.

First thing you need to do is remove the glove box. If you haven't done this yet, open the door and squeeze the compartment together near the pins that hold to the top to the sides. This allows the door to swing free downward. Next there are four 10mm bolts that hold a bracket at the bottom to the dash frame (the hinge side of the glove box mounts to this bracket). 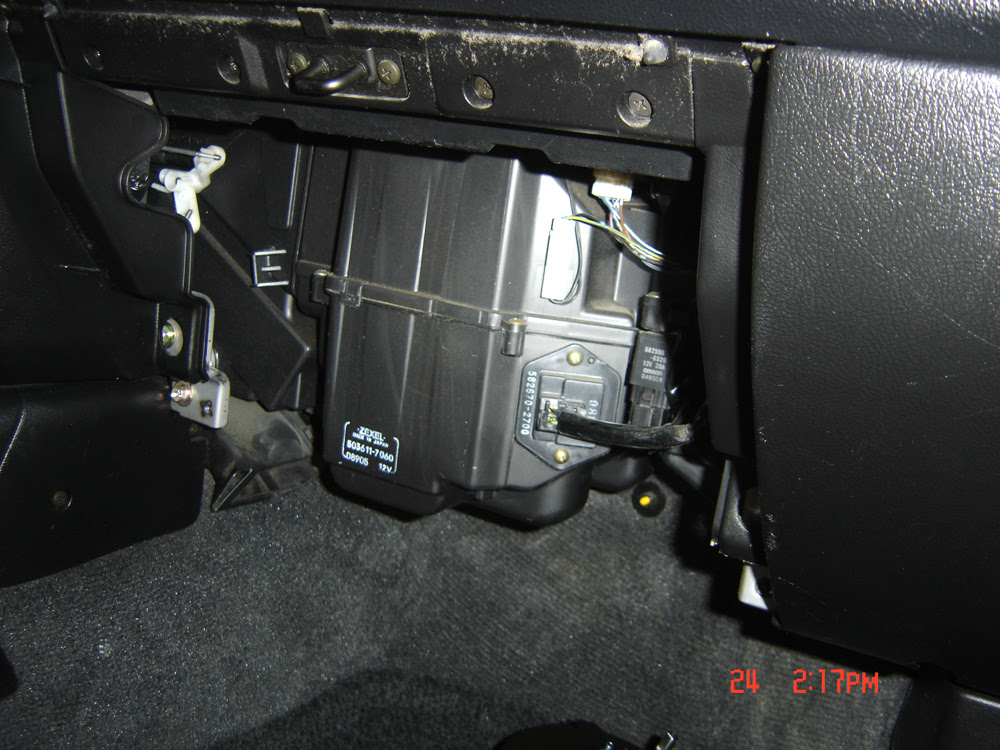 The motor hangs from the bottom of a plenum on the right side - there are four screws you need to remove which allows it to come free. Careful with this as there's a basket fan attached to the top which you'll need to reused. The screws in back in my VX were a bit corroded so I cleaned them up before replacing.


The new fan comes in a generic "Made in China" white box - PM3914. It's shaped a bit different from the stock blower motor - basically a small DC motor mounted to a metal plate instead of the formed plastic of the original. Also the heat vent in the new is a thick flexible tube instead of part of the molded housing of the original. 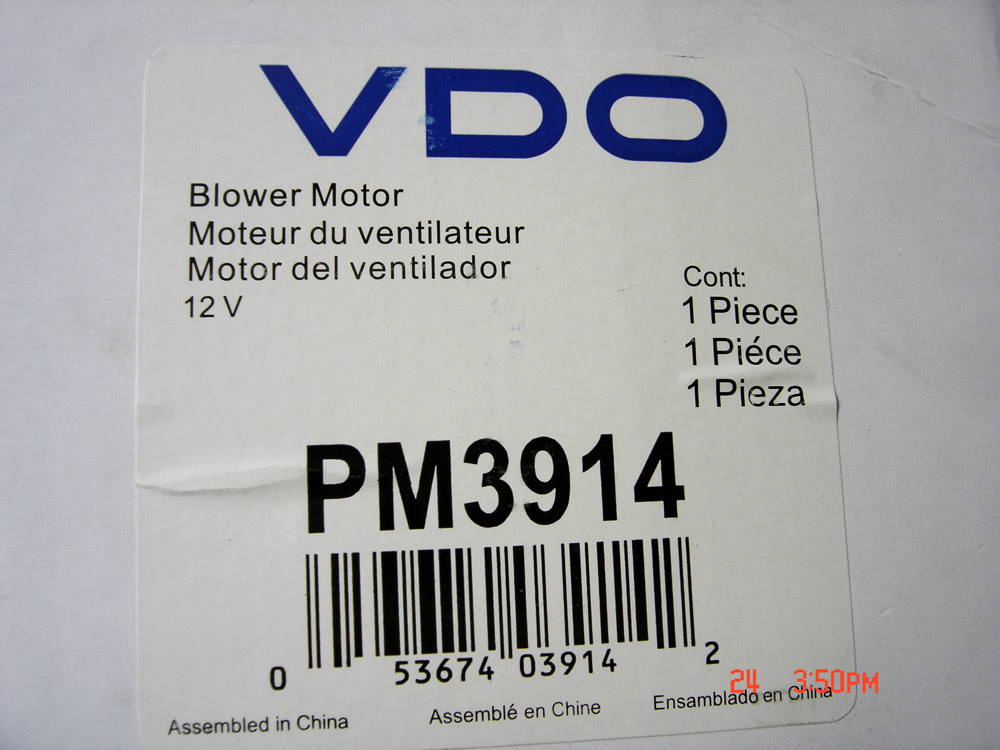 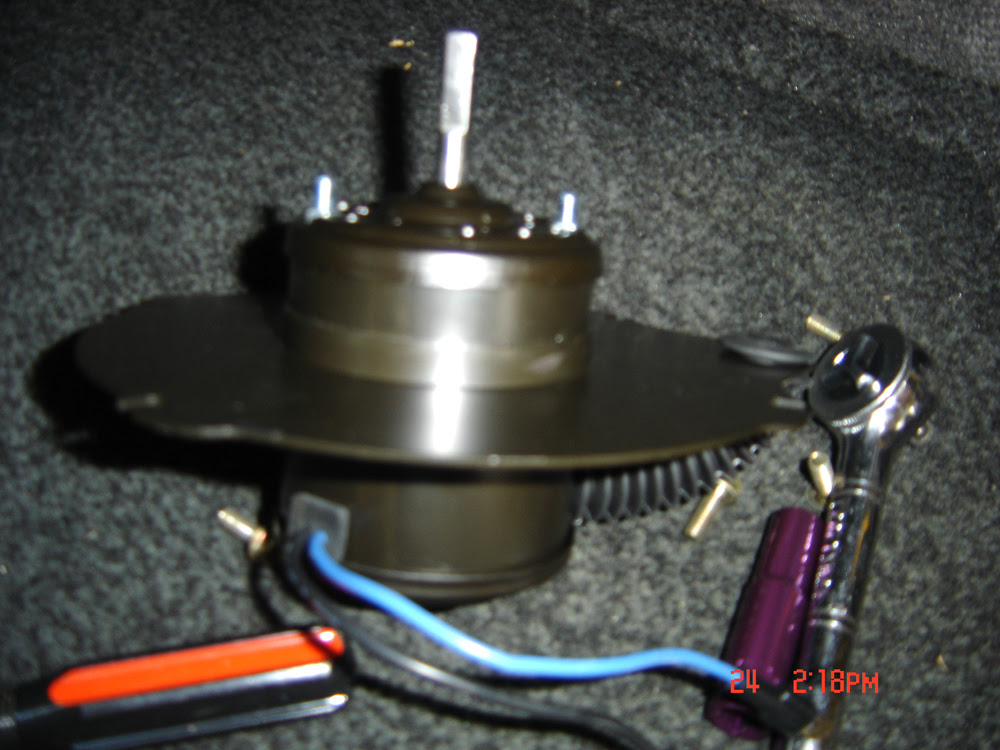 The looks don't matter much here as the entire unit is behind the dash and difficult to see unless you stick your head way up under there. 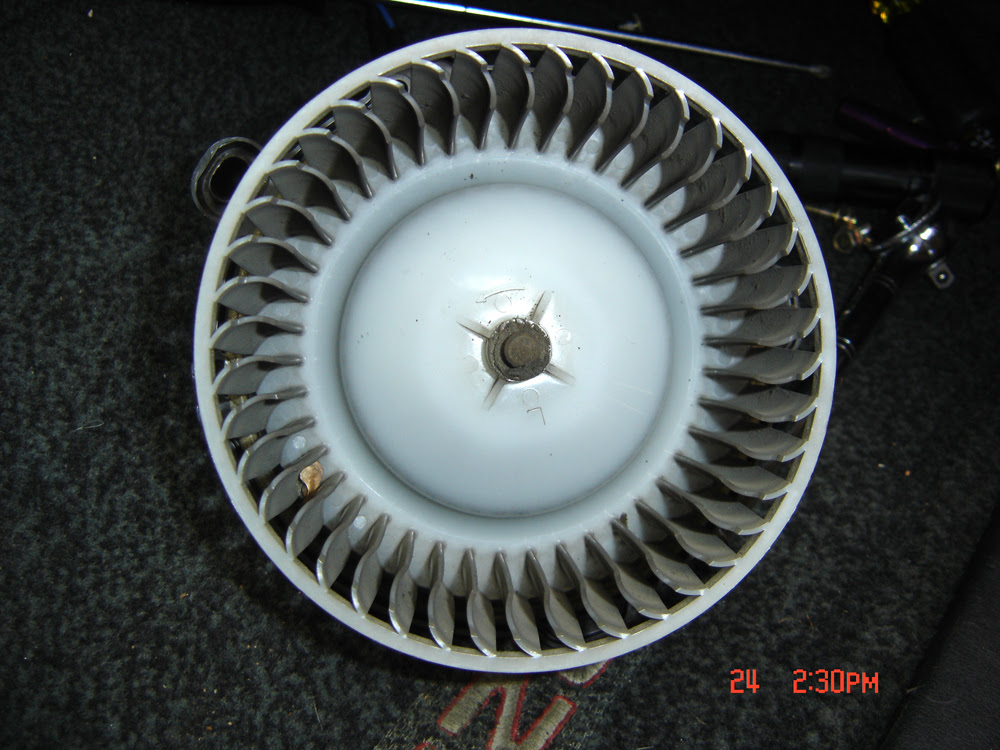 The old housing "squirrel cage" or basket fan was fairly dirty - be very careful removing the retaining clip on the shaft. The instructions suggested cutting it off which I did. There was a bit of rust on the shaft so I smoothed it out first with some fine sandpaper. When pulling up the basket pry-up from the bottom - don't risk busting the fins on the sides. The new unit comes with new clip for the shaft (it's in a small zip-lock with the instructions). Before replacing the basket clean it off well. I used throttle body cleaner (plastic safe) then scrubbed down with soapy water, drying with a blow dryer before putting it on the new fan.

Once the basket it on you can fit it up into the housing. The rubber tube fits to an opening where the molded plastic used to fit. Dry-fit first - you'll find that there's a fairly substantial gap between the metal plate of the new blower motor and the existing housing. Look in the box and you'll see three thing back-adhesive weather strips - these are garbage. I used adhesive backed felt instead (happened to have a few sheets of it). You'll want something that will compress down when you put the screws back in.


The new fan doesn't come with a connector that will fit the existing wiring harness, however the spade bits do work. Fit the black from the motor to the blue wire with black stripe from the harness, and the blue from the motor to the blue wire with white stripe from the harness. Start your ignition and try out the system before putting everything back together. Once you're satisfied, you can either rig something to hold the motor to the harness; direct connect the wires with solder and shrink tube; or simply tape things up with electrical tape (I did the latter - not much chance of bumping the connector to make the tape come loose). Put the glove box back in and you're done. The whole job takes about 30 minutes. You'll need a Phillips bit screwdriver and a 10 mm socket with extension. Some electrical tape and something to use as a compressible gasket (I used felt). The results were much better than I expected with a super-strong flow of air. I hadn't realized how weak the system had become with the old, failing motor.